New Life in a New City by Jane Emilia Tomasso 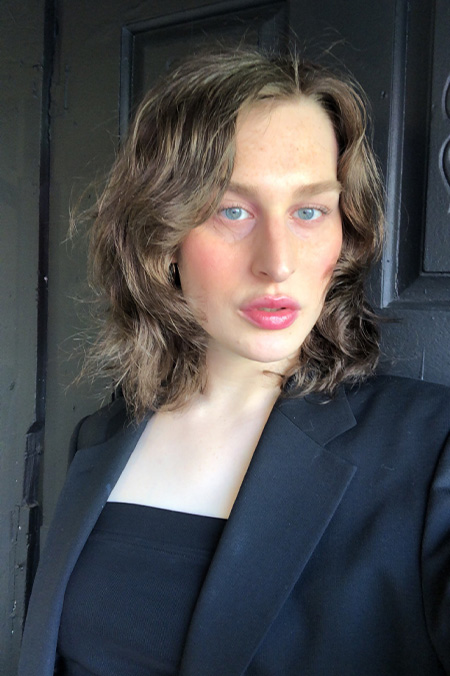 Life brought me to Toronto. I grew up in Amherstburg with Windsor as my nearest metropolis. It was difficult to understand my confusing childhood as a trans girl, especially considering the surrounding world was not only destitute from the creation of popular culture, and Essex County was and is often latent to the ever-changing social landscape.

In Windsor, I was a patient at the Windsor Family Health Team. I joined the patient roster in early young adulthood because it was one of the few teams in Windsor educated on how to care for trans patients. As required by law, I was sent for a psychiatric evaluation to ensure that I “fit the bill” of someone who needed hormones. The receptionist at the psychiatrist’s office had a terribly unwelcoming demeanor and always seemed to be on the phone with staff from her children’s school about one problem or another. Visits to the psychiatrist made me feel like an outlier. Windsor is a small city and never when I was young did I have interactions with other trans girls to relay our experiences and empathize. At a mid-point in my transition, I was sent to an endocrinologist to have my hormone levels checked and ensure everything to do with my medication was in order. The endocrinologist took it upon himself to ask invasive questions about my sexual life and history and then deemed a physical to be necessary. I later asked my family doctor if he had asked the endocrinologist to give me a physical or investigate my sex life – he had not

At age twenty-two I moved to Toronto after working for The Hudson’s Bay’s Windsor store in the cosmetics department for around two-and-a-half years. I felt as though Toronto not only represented a call to opportunity for all young people, but for young trans people especially. In Toronto I experienced for the first time a work climate that not only celebrated my transness but also let it be a nonfactor when it was irrelevant to discuss. Nothing is totally perfect, of course, but there is opportunity in Toronto for trans people who really work at it – and not much of the sort in Windsor.

Some barriers arose in my moving to Toronto. I had two primary concerns: was I going to be happy, and would the high cost of living prove to be untenably high. Those barriers and others certainly did rear their heads. As I began to adjust to city-living, I realized my sporadic gender dysphoria had not so much previously abated as it had been crowded out by exciting changes in my life. Dysphoria unfortunately returned and months later I left a plastic surgeons office with a $20,000 quote for a rhinoplasty and a brow shave. People who do not understand trans individuals often find this sort of expense and desire to look a certain way to be extraneous when it comes to discussions about trans people’s need for life-improving surgeries like facial feminization and the broad spectrum of ‘plastys that reside under its scope. In Toronto I hit a major financial barrier that, truthfully, would have hit in Windsor as well. Facial and corporeal surgeries are such an important part of the conversation when discussing the mental health and overall wellbeing of trans people and, as an aside, it is a necessity that OHIP should cover. After a long chat with my parents, my father decided that he would help me and fund my surgeries. I now am a totally content patient at the Sherbourne Health Centre in Toronto, an institution that provides much of Ontario with modern and empathic guidelines of care for trans people. I am comfortably able to book my own STI checks, checkups, and have my doctor help me with my pre-FFS surgical forms.

In the months after moving to Toronto, I truly did live! I found an expansive community of trans and queer people waiting for me in good old Hogtown. Never before had I had so many affirming voices in my life encouraging me to be myself, be authentic, live in my reality, and express myself endlessly and freely. My self-esteem skyrocketed, but at times so did my self-doubt. My understanding of my own sexuality changed from previously shrivelled and WASP-informed to expansive and inquisitive. I have a phenomenal support system of friends that have really helped me to better myself. They are the sisters that I chose. It wasn’t all positive, however. Many times I was harassed on the streetcars while running errands or commuting to work, and I’ve been threatened with physical violence as well. It is often men that perpetrate this violence very often, and more people need to start protecting trans people using public transit from harassment. After these violent experiences, I desperately needed the loving shelter of my community, which I often get from my trans roommate and her trans girlfriend.

My experiences in Toronto have definitely given me a feeling of personal satisfaction. Within one year I moved out on my own, started a new job, received a promotion, had portraits of me exhibited at a Canadian Women’s Foundation luncheon with my commentary, and realized that it’s okay to be a trans woman that is not totally straight. Revelations upon difficult yet thankful revelations characterized my first year in the city. I feel the success of my experiences now only as I am writing about it, and I am very happy that I have a platform to share my thoughts. I am currently part of the managerial staff at a Toronto-based skincare company. I am happy to be where I am but I am always looking for the opportunity to endeavor creatively, which I do not get to do at my current job. I hope that in the future I will find myself in a more creation-oriented line of work.